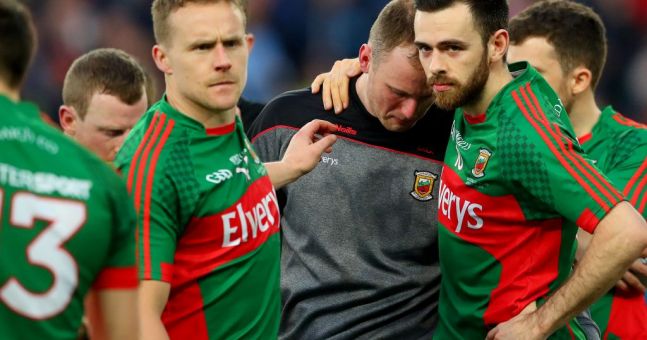 After almost 160 minutes of football, Dublin and Mayo were finally separated, by a single point. It was the reigning champions and the bookies favourites who clung on for their lives after what were two of the highest intensified games of football that you will ever see. Both games had their moments of brilliance. Both games had moments of high temper. And surprisingly, both games had a high number of mistakes and unforced errors. However there was one mistake that grabbed all the headlines, that of Mayo’s net minder Rob Hennelly. After failing to hold on to a dropping ball, Rob made a lunge of desperation to stop Dublin’s Paddy Andrews. Only in doing so, he conceded a penalty for his side, and received a black card. And for this, we read:

“What it feels like to cost your team an All-Ireland.”

“Goalkeeper was subjected to online abuse after All-Ireland Final.”

“Hennelly call to haunt Mayo in winter of regret.”

So, who would be a goalkeeper?

Whenever I read people’s opinions, blaming an entire team’s loss on one mistake by a goalkeeper, I just think that it is another case of bully analysing. Like who is the easiest target for me to direct my discontent at? The answer is usually either, the free taker or in this case, the goalkeeper.

On Saturday, I actually imagined how a certain number of ‘keyboard warriors’ would find themselves torn up at the end of the game. Not knowing whether to subject their blame on Hennelly himself, or indeed Mayo’s marksman Cillian O’Connor after he failed to convert with his final effort to tie the game. What these people have to remember is that Gaelic Football is a game played by 15-20 players over a period of 70 minutes. There are going to be mistakes, there are going to be blunders and errors. But do not take the easy way out and blame one player for an entire team’s shortcomings. Goalkeepers and free-takers have had the courage to put their necks on the line for their club/county. And there are some, Rob Hennelly included, who will step up to do both if it is required of them.

What people need to remember is that goalkeeping in Gaelic Football is no longer just goalkeeping. It is the starting point of everything that happens on the field. No longer is a goalkeeper just expected to “boot it out” or “kill anything that comes into the square.” Now a goalkeeper must catch that dangerous ball that’s dropping in as to regain possession. Now a goalkeeper must pinpoint that gap between the full forward and the corner forward to find his corner back and start a new attack. With this, a goalkeeper is no longer just number one on the team sheet, but number one for responsibility too. It is time that we start to cut them that bit of extra slack that they deserve.

So, unlucky to Rob and Mayo last Saturday, I for one believe that they will be back. Especially if the rest of the team’s attitudes are anything like that of Rob Hennelly’s;

“I’ll never be able to fully describe what was going through my head at this moment. What I was expecting to be one of my best days turned out to be the opposite, and it breaks my heart that I didn’t come through for my team and county.

I told a brilliant young man Anthony Casey that that one game wouldn’t define him, and today, and probably for a while to come, I’ll be telling myself the same thing. It is not a good place to be, but I know I have to come back from it, I still believe I have something to offer this team and my county, so now is not the time to relent.

I have to say that the support I’ve received has been incredible and the messages from friends, family, former team mates, players from other counties, and of course the Mayo supporters, has helped me immensely.

I don’t know where I’ll be in a years time, but I do know that I’m not going to give up. I love Mayo and this team too much to do that.”
Rob Hennelly, via Instagram.